What is cost-effectiveness analysis?

Cost-effectiveness analysis is a tool used to aid decisions about which medical care should be offered. It is a method of comparing the cost and effectiveness of two or more alternatives. Such comparisons are useful when one of the alternatives being considered is standard care, as this allows the decision maker to consider whether an innovation is better than the status quo.

The goal of cost-effectiveness analysis to determine if the value of an intervention justifies its cost. Cost-effectiveness involves more than determining cost, it also involves assignment of a value to the outcome.

To facilitate the comparison of different interventions, a standard method of cost-effectiveness analysis was developed by a task force of experts organized by the U.S. Public Health Service (PHS) (Gold, Siegel, Russell, & Weinstein, 1996) and updated in 2016 (Neuman et al., 2016).

Below are the updated PHS Task Force recommendations:

► Costs and benefits should be discounted at a 3% annual rate, to reflect the lower economic value of an expense that is delayed and the higher value of a benefit that is realized sooner.

► The task force also described methods of estimating the statistical significance of cost-effectiveness findings. Note that when cost-effectiveness is a primary study hypothesis, variance in costs and outcomes, along with their covariance, will affect the sample size.

A description of the major changes made by the second PHS task force is found in the HERC Bulletin article, "Major Changes to CEA Guidelines" (available upon request), as well as this open access JAMA article by task force members (Sanders et al., 2016). For an overview of the 2016 PHS Task Force recommendations, please also see the HERC cyber seminar "Recommendations for the Conduct of Cost-Effectiveness Analysis from the Second Panel on Cost-Effectiveness Analysis in Health and Medicine" by Douglas Owens, MD, MS on January 26, 2022.

When the more effective innovation is more costly, strong dominance provides no guidance. The decision maker must decide if the greater effectiveness justifies the cost of achieving it.

It is for this reason that the PHS Task Force recommended that cost-effectiveness studies use the Quality-Adjusted Life Year (QALY) as the outcome measure. The QALY reflects both the quantity and the quality of life (Torrance & Feeny, 1989). It is the most widespread method of measuring the value of providing a healthcare intervention.

Quality of life adjustments are based on patient or societal ratings of the quality of life associated with different health states. The ratings, also known as "preferences" or "utilities," are on a scale of zero (representing death) to one (representing perfect health). There are several methods for obtaining these ratings. The Time-Trade-Off method asks the individual doing the rating how much healthy life they are willing to give up to be cured of the condition. The Standard Gamble method asks them how much of a risk of death they are willing to incur in order to be cured of the condition. The Health Utilities Index (HUI) and EuroQoL are two commonly used instruments used to gather information on quality of life. Methods for assessing economic quality of life are found in the HERC guidebook, Preference Measurement in Economic Analysis, as well as in the HERC cyber seminar entitled, "Introduction to Effectiveness, Patient Preferences, and Utilities" from March 30, 2022.

When the more effective innovation is also the more costly, the decision maker must decide if the greater effectiveness justifies the cost of achieving it. This is done by calculating an incremental cost-effectiveness ratio, or ICER. The incremental cost-effectiveness ratio is the difference in costs divided by the difference in outcomes. The ratio is the most useful when outcomes are expressed in QALYs because the QALY is an outcome that can be compared across different types of interventions.

The cost-effectiveness ratio represents a measure of how efficiently the proposed intervention can produce an additional QALY. By using this standard method, the cost-effectiveness of alternative innovations may be compared, helping healthcare payers decide what changes they should adopt. The goal of the decision maker is to adopt all interventions that represent efficient ways of producing QALYs and to disapprove of interventions with ratios that are too high.

In some studies that compare multiple mutually exclusive interventions, an additional dominance principle is applied (Kamlet, 1992). As in the case when comparing two interventions, the analyst first applies the principle of strong dominance. Any of the competing interventions is ruled out if there is another intervention that is both more effective and less costly.

Example of Method for Multiple Interventions

Here is a hypothetical example of a comparison of multiple mutually exclusive interventions. The table gives cost in dollars and outcomes in QALY's for standard care and 5 innovations. In the first table, we can rule out intervention A. It is strongly dominated by intervention B, which costs less and yields better outcomes.

Next we apply the principle of extended-dominance. Interventions are listed in the order of effectiveness. The incremental cost-effectiveness ratio of each intervention is found by comparing it to the next most effective intervention.

Dominance principles can be also applied by ranking interventions in the order of their cost. The same finding will result. Dominance principles can be applied when outcomes are measured in units other than QALY's. This requires the assumption that measures reflect the most important effect of the treatment on health. For example, if a drug prevents death, and the side effects are known to be minor, outcomes could be measured in terms of life years of survival.

QALY's are the preferred measure of the outcomes, because they have the potential to allow the analysis to trade off mortality with quality of life, including treatment benefits and the side effects.

How do I Evaluate the Uncertainty of an Incremental Cost-Effectiveness Ratio?

Here, we will define an incremental cost-effectiveness ratio (ICER), discuss how to evaluate statistical uncertainty, and present resources for finding the variation in the ICER using SAS.

Definition of the incremental cost-effectiveness ratio 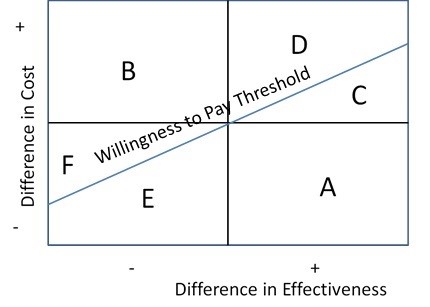 For the upper right and lower left quadrants, we can determine if a point is cost-effective only if we have a willingness to pay threshold. In the U.S. thresholds of $50,000/QALY or $100,000/QALY are often used.

Statistical uncertainty of the ICER

Computing the ICER is easy, but it would be incorrect to justify the cost-effectiveness based on one data point without uncertainty. This would be akin to reporting an odds ratio without a confidence interval. Unfortunately, such practice is not uncommon (Houlind, et al. 2013), but it can be misleading. One must present the ICER with the statistical uncertainty.

The ICER cannot be represented by a 95% confidence interval. Each value of the ICER represents two points in the plot of cost vs. effectiveness. For example, an ICER of $100,000 results if the intervention costs $100,000 and yields 1 QALY, and if the intervention saves $100,000 at a loss of 1 QALY. The statistical uncertainty for an ICER must be regarded as a point in a confidence ellipsoid plotted in two-dimensional space, with cost plotted on the Y axis and effectiveness plotted on the X axis.

We can find the variation in the ICER by randomly sampling the source dataset. We find a large number of points that can be plotted in the two-dimensional space and evaluate the distribution of points over the region. In clinical trials, we can use bootstrap sampling to find these points. For medical decision models, probabilistic sensitivity analysis generates these points.

Bootstrap sampling of the ICER

Bootstrap sampling is a method used in clinical trials to find the variation in the ICER. Gray et al. (2011) provide a detailed overview and instructions of this method including a bootstrapping exercise using Excel. Usov (2013) provides helpful SAS code to conduct bootstrapping as part of a SAS conference proceedings paper on economic evaluation methods in clinical trials.

Identifying Health Care Services that are not Cost-Effective

The most recent effort to address this problem is being coordinated by the American Board of Internal Medicine Foundation and Consumer Reports. The "Choosing Wisely" initiative originally enlisted 9 medical specialty societies, each of which identified five examples of care that is of uncertain value (Cassel &. Guest, 2012). As of 2022, over 80 medical specialty societies have published more than 600 recommendations regarding overused tests and treatments.

Previous efforts have also identified ineffective and inefficient services. The Institute of Medicine listed ineffective treatments widely used in the U.S. health care system in 2008 (United States Institute of Medicine, 2008). The Rand Corporation developed its own list of inappropriate services, including hospitalization, surgery, and pharmaceutical treatments (Schuster, McGlynn, & Brook, 2005). Researchers from the Network for Excellence in Health Innovation (formerly the New England Healthcare Institute) identified 460 studies published in the peer reviewed literature between 1998 and March of 2006 that identified waste or inefficiency (New England Healthcare Institute, 2008). A review of the Tufts Cost-Effectiveness Registry identified low-value services that might be excluded from a value-based insurance coverage (Neumann, Auerbach, Cohen, & Greenberg, 2010). A national panel of health care organizations established national priorities for the U.S. health care system, including a specific list of inappropriate services (National Priorities Partnership, 2008). An American College of Physicians workgroup identified 37 examples of clinical situations in which diagnostic and screening tests do not yield very high-value (Qaseem et al., 2012).

These analyses have documented the presence of inefficiency in the U.S. health care system, but they have some limitations. They represent lists of individual studies, not the synthesis of literature on a topic. As a result, there may be countervailing evidence that a listed service is effective or cost-effective. Not all of these efforts describe the strength of the evidence. It is thus not possible to tell which findings are based on the strongest evidence. There is also a need to rank these services by total cost to set a priority for action.

Efforts to address the problem of existing care that is not cost-effective have been called "disinvestment" or "de-implementation" programs. There have been similar initiatives to Choosing Wisely in over 20 countries (Levinson et al., 2015), including those proposed by Elshaug et al. in Australia (Elshaug et al., 2009) and NICE in the UK (Pearson & Littlejohns, 2007).

New England Healthcare Institute. (2008). How many studies will it take? A collection of evidence that our health care system can do better.

United States Institute of Medicine. (2008). Knowing what works in health care: a roadmap for the nation: National Academy Press.